1 comment
August 31, 2013
Beauty     Life & Rants
This is a picture of Cheryl Cole’s bum tattoo.  Yes believe it or not, she’s only gone and covered her whole ass with a big flower tattoo.
With most tats, people often regret them later on in life when things go south, but with this one, I don’t know what possessed her to get inked so severely in the first place. She’s one sitting away from ending up like this…

Cheryl, along with other celebrities, doesn’t like people commenting on her choice of ink.  However, when it’s on full display and you’re in the public eye, it’s bound to be up for scrutiny. 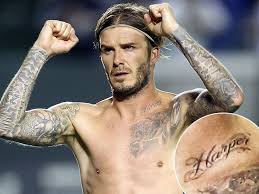 Anyway, Cheryl’s not the only one who has spent too much time in the tattoo parlour.  David Beckham is another such example of not knowing when enough is enough.  David is inked so extensively that his ‘sleeve’ arm tattoos have blended into a blue-ey greeny mush.  And he hasn’t stopped there, a recent pic
shows his ‘art’ has spread across his chest.
One Direction have a couple of etch-a-sketch comic book tattoos, while Angelina Jolie and Johnny Depp famously wore the names of their former partners, before editing slightly when the relationships broke down.
Anyway, all this trigger-happy tattooing means that it’s rare to see a non-inked celebrity these days.  Though, happily, it hasn’t quite caught on as much amongst us mere mortals.
Among Asians, tattoos are even less common.  While some Bollywood stars sport the odd tattoo, it’s not widely seen.  And of the stars that do have tattoos – Deepika Padukone, Priyanka Chopra, they are so discreet that they are barely visible, and usually hidden in movies.
I actually hope it stays that way, as let’s be honest, a tattoo kind of kills the femininity of a saree, dress or any other outfit.
What are your thoughts?  Do you like tattoos or hate them?

Looking for a new foundation during lockdown? Can’t

If you liked this, you will love this too...

A different Eid in lockdown

Working from home with kids – 15 tips to make it work

All about positivity, not perfection... For a real world view, minus the filter, click here.

My new book – The Secret Diary of a Bengali Bridezilla